The World Health Organization website states that “genetically modified organisms (GMOs, also known as genetically engineered or GE) can be defined as organisms in which the genetic material has been altered in a way that does not occur naturally. It allows selected individual genes to be transferred from one organism to another, also between non-related species.”[1] Part of the DNA from a brazil nut, for example, can be implanted into the DNA sequence of a soybean. The soybean then expresses the trait selected from the brazil nut, such as resistance to a certain parasite. Genetically engineered crops were first developed to improve crop protection from the use of pesticides. Many people believe that this can be expanded to include crops that can better withstand extreme temperatures, or produce a higher yield, or delaying ripening. It is exciting thinking about the numerous directions that genetically engineered crops can take, but it is also frightening at the same time. For the present and the future I encourage the scientists to tread lightly while traveling the new path of bioengineered crop development.

I asked if genetically engineered crops can actually be healthy to eat. The answer is that we do not really know for sure. “Neither the FDA, USDA, nor the EPA has done any long-term human health or environmental impact studies of GE foods or crops, nor has any mandatory regulation specific to GE food been established.”[2] The only studies conducted have been by the companies themselves. The government is not regulating these foods any differently than regularly grown and harvested crops that we have been consuming for thousands of years. Though, as I stated above, GE crops can not occur naturally. Genetically engineered food is not labeled any differently. These companies are not required to explicitly state that their products are genetically engineered. It has become impossible to trace if anyone has gotten sick from GE crops because they are not required to be labeled as such. 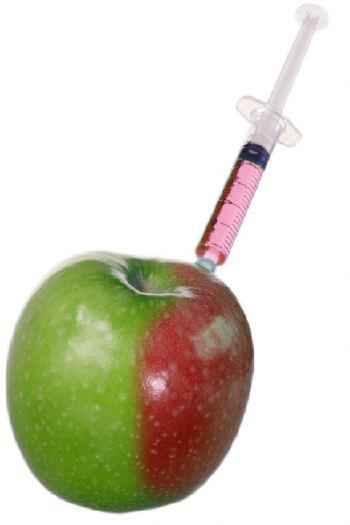 “From the food safety point of view, probably the biggest concern would be allergenicity.”[3] Since GE crops are not labeled it is impossible for the consumer to know that they are GE crops. Therefore it becomes easier for a person with an allergy to consume a food that would not generally cause an allergic reaction. This can happen because it has had DNA from the allergic food inserted into the consumed food. For example, people who are allergic to nuts could not eat a certain soybean crop because it had been infused with DNA from the brazil nut. Consuming the soybean would produce an allergic reaction characteristic from a nut. Luckily the company that was creating this soybean realized this and stopped producing it. Next time we may not be so lucky. Those who oppose the allergenicity argument say that “there’s always a chance that a protein could be an allergen, it isn’t likely that most proteins would be allergens.”3 In response I would argue that the specific proteins that cause allergic reactions are not all identified. So, do the potential life threatening allergic reactions outway the necessity of producing that genetically engineered crop?

Proponents for GE crops argue that they can help feed the hungry of the world. “[With GE] we can put things like Vitamin A into a rice plant…It’s going to solve major problems in the developing world, as to [the] availability of food materials for good nutrition.”3 GE crops provide nutrition normally lacking in a culture’s diet. “The biggest advantage of biotech is its package technology in the seed. You don’t have to teach these farmers [in the developing world] new culture practices. You don’t have to get them to completely change the way they do farming. You just give them a seed, and that increases productivity in that seed itself.”3 In response to GE crops solving world hunger some people reply that “the biggest problem behind hungry people is lack of money. It’s not technology. The better approach would be that people could buy food that would give a well balanced diet, instead of having to pile all the nutrients into one type of food.”3 I argue that we should do both to end world hunger.

As you can see, the debate over genetically engineered crops is expansive and people are fervent in their beliefs on both sides. I believe that GE crops can provide many advantageous benefits. I believe that the FDA should regulate it differently than traditional crops because of the potential harmful allergens. Having crops fortified with specific vitamins would be beneficial to the world’s hungry, as long as the company that possesses these crops is not out to gain the most money from it. How would we get these companies to do that? The answer to that question I pose to you. How do we get companies to look to the greater good than to their wallets? How do we get people to care about the hungry and not about the profit that can be made off of their suffering? Genetically engineered crops could be part of the solution if only we had the will to act.

For more information there is a great lecture done by Harvard Graduate students addressing the issue of genetically engineered crops. I encourage you to take a look.