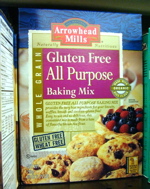 
If you ever take a walk through the organic or “health food” section of the grocery store you may have noticed that you’re seeing the label “gluten-free” on more and more products like this bake mix. These products are not popping-up in response to a trendy health craze or an obscure allergy, as I (and perhaps you) once supposed, but rather for the benefit of people suffering from a relatively common autoimmune disorder called Celiac disease.

An estimated 1 in 133 people have Celiac disease, yet 97% of them don’t know it (more statistics). Celiac disease* is an inherited autoimmune disorder in which the body cannot tolerate the protein gluten, found in wheat, rye, and barley. It is not to be confused with a wheat allergy, which causes an immediate but temporary reaction when gluten is ingested, but is not responsible for the extensive damage to the small intestine that results from untreated Celiac disease (1). Although wheat has been the corner stone of many diets since the dawn of civilization, the human body actually has not evolved to digest gluten (7, 8). This means that even in a healthy person, it cannot be completely digested and a relatively large fragment of 33 amino acids called gliadin remains. The presence of this fragment is toxic to a person with Celiac and an immune response is initiated, causing inflammation of the small intestine (6). Consequently, nutrient-absorbing enterocytes lining the intestinal walls are killed and the finger-like villi atrophy and flatten, decreasing surface area, further inhibiting nutrient absorption. In this state, it does not matter how much a person eats or if the food is especially nutrient dense because these nutrients cannot be absorbed and are not available to the body, and so malnutrition and a host of related maladies result (5).

Once considered a rare disease suffered by young children who would eventually outgrow it, it is now known that symptoms can begin at any point during one’s lifetime. Whether or not a person develops Celiac disease depends upon a genetic predisposition for it and an environment that can trigger its onset--often a stressful emotional or physical event precedes the beginning of symptoms (3). While there is no cure, the disease can be controlled and the intestine can heal if a strict gluten-free diet is followed. This includes omitting all foods that contain even trace amounts of wheat (durum, kamut, semolina, and spelt), rye, barley, and farina. Completely eliminating gluten from one’s diet can prove a difficult challenge, as gluten is second only to sugar in its pervasiveness in our diets (3). It is in popular foods such as bread, cereals, pasta, and cookies and it can also be found in the most unexpected places, like in salad dressing, toothpaste, lip balm, and vitamins (5). 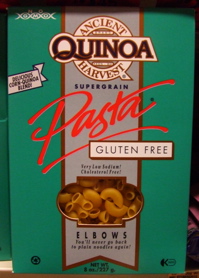 A gluten-free diet can be more expensive, with special gluten-free products generally priced 2-6 times higher than their counterparts, and these diets may be unbalanced and deficient in particular nutrients(1). A typical gluten-free diet tends to be high in fat, low in fiber, and deficient in folate, iron, and zinc, among other important nutrients and so special care must be taken, like in any other restrictive diet, to make up for these deficits and one must be aware that many gluten-free products are not fortified with the nutrients that one is missing from avoiding gluten. A gluten-free diet can provide healthy and balanced nutrition if it is centered around foods that do not contain additives and are not processed: vegetables, fruit, beans, poultry, seafood, and lean meats, as well as naturally gluten-free grains, such as corn, brown rice, and quinoa (1).

What makes this disease so devastating is the fact that it is manageable but many of the 3 million (at least) Americans with the disease experience chronic abdominal pain, bloating, constipation, diarrhea, skin rashes, oral ulcerations, anemia, irritability, fatigue, weight loss and depression, completely unaware of the fact that eliminating certain foods from their diet would not only make them feel a lot better (check out one athlete's improved health after discovering she has Celiac) but also reduce their chances of developing thyroid disease, type 1 diabetes, gastrointestinal cancer, osteoporosis, neurological disorders, various autoimmune disorders, infertility, and having children with birth defects—potential consequences of living for years with the disease without treatment (5). Furthermore, studies have shown that people are typically diagnosed 11-12 yrs after symptoms begin, giving ample time for chronic diseases to develop (1). A simple, inexpensive blood test and possible biopsy to look for atrophied villi is all that is necessary for diagnosis, but these tests often do not happen because many doctors miss Celiac symptoms or mistake them for manifestations of other disorders such as Crohn’s disease, lactose intolerance, irritable bowel syndrome, or attribute irritability and depression to another cause (3). Diagnosis is made more difficult by the fact that many with Celiac disease are asymptomatic, although their small intestines are being damaged and they are malnourished. Celiac disease is especially traumatic for children who are still growing and developing, particularly children living in poverty who are already malnourished and efforts to feed them with gluten-containing foods may be counterproductive.

In researching Celiac disease, I found a common complaint among advocates is the lack of funding and education for the public and medical community about the disease because treatment is based around diet rather than profitable prescription drugs (4). However, there is research being done to find ways to help people with Celiac disease lead more normal lives and reduce, if not eliminate, dietary restrictions. Attempts are being made to genetically engineer wheat that is least likely to elicit an immunological response (9). There are also oral enzyme therapies on the horizon that would have the same affect as giving lactase to a person who is lactose intolerant, allowing them to eat milk products. Additional research is being done into drugs that can reduce the permeability of the intestinal wall, preventing gluten from reaching the immune system (2, 8)

Celiac on The View This is a great clip from the television program "The View" that gives a brief but comprehensive overview of Celiac disease with the help of a prominent specialist, Dr. Peter Green. (You can also read an interview with him here). This is the website mentioned in the video http://www.celiaccentral.org/

If you don't enjoy talk show banter, these links also are brief and very informative:

photos on this page by R. Gee