A brief discussion by L. McWethy

By any measurement, the United States is suffering from an obesity epidemic of grand proportions. According to a study reviewed in the New England Journal of Medicine, two-thirds of American adults are overweight (having a body mass index—BMI—over 25) or obese (having a BMI of 30+). According to this study, the prevalence of obesity in the US has increased by 50% every decade since 1980. The National Institute of Health is estimating that over the next few decades, life expectancy could decline by as much as five years unless we make aggressive efforts as a country to curb the rising obesity rates. How is it possible that the US could face its first decline in life expectancy in the modern era? One part of the answer to this wide-ranging question is the increasing role that corn has come to play in our modern diet.

Most people in the US probably do not think of themselves as large consumers of corn in the traditional sense that they do not eat a lot of corn on the cob. In fact, the average American consumes one ton of corn a year! How is that possible? Most of the corn that we consume enters our bodies after being highly processed, being broken down to simpler components by either animals or industrial plants and then served to us in the form of steaks, pork chops or sodas. In the last 30 years, most people in the United States have never eaten grass fed beef as nearly all beef sold in the supermarket today is fed almost entirely on a corn diet. Similarly, sucrose, or table sugar as it is commonly known, has been replaced by corn syrup as the predominant sweetener in the US. Changes in agricultural practices largely explain how and why corn has come to play such a large role in our diets.

Corn originated in central Mexico and spread north, being selectively cultivated over the years to favor certain traits. The corn grown by our ancient ancestors was high in protein while today’s corn has been highly selected to be extremely high in carbohydrates. Mechanization in farming as well as corn trait selection to produce heartier, more productive plants, has resulted in a huge increase in the productivity of our corn fields. In the 1860s, corn yielded 20 bushels per acre. By 2000, this number increased to 140 bushels per acre.

While production climbed ever high, the government made an important change in agriculture policy in the early 1970s that largely explains why we find corn in so many products today. Prior to this time, the government actually paid farmers to leave fields fallow as a means of controlling supply and ensuring stable prices. In 1973 new legislation was introduced which subsidized production of corn, paying farmers to produce instead of leaving their fields empty. This helped increase the trend towards larger farms and ever larger yields, eventually resulting in huge surpluses of corn that exceeded storage capacity. When more corn was produced than could be eaten, the excess needed to be used somehow. Lucky for the corn industry, in the 1960s scientists discovered that they could process corn starch into glucose and fructose. Glucose is only 70% as sweet as sucrose, but fructose is 30% sweeter than sucrose. When mixed together (in a 45% glucose, 55% fructose blend), scientists were able to create an inexpensive sweetener known as high fructose corn syrup that tasted just as sweet as sucrose but was less expensive. Prior to the 1970s, no one had ever eaten high fructose corn syrup, but by the 1980s, it captured over 50% of the sweetener market, replacing sucrose.

Scientists developed more and more ways to process corn into useful products, finding creative ways to deal with the increasing oversupply of corn. Corn has come to sweeten things like soda and candy, but also a whole range of products that are not usually considered to be especially sweet such as spaghetti sauce and apple sauce. Corn has become so ubiquitous as a sweetener that one has to work hard to find food products that do not have it listed prominently as an ingredient. Additionally, the germ of corn is processed into corn oil which can then be hydrogenated to produce solid products like margarine. Among the long, long list of products that come from corn are included familiar product names like: ethanol, citric and lactic acid, glucose, fructose, maltodextrin, sorbitol, mannitol and xanthum gum, dextrin, cyclodextrin and MSG, to name only a few. Scientists have recently found another huge market to supply with corn: fuel for cars in the form of ethanol. Every last bit of a corn kernel is used to produce different products, with less desirable parts being fed to animals which eventually get eaten by humans.

All of this corn consumption comes at a price to the planet and its people. The energy costs of processing corn are enormous, not to mention the environmental toll of all the fertilizers that are used to grow the crops. For every bushel of corn that is process, five gallons of water are required. With 2 billion bushels of corn processed each year, that is 10 BILLION gallons of water that are required to create our corn sweeteners and oils. Additionally, to produce one calorie of food, ten calories of fossil fuel are burned. 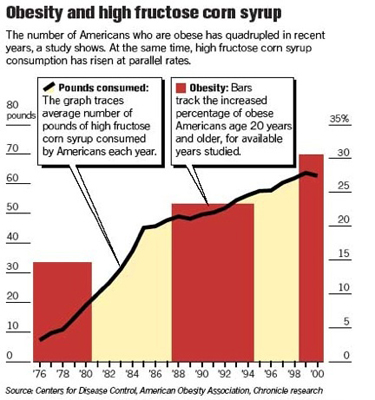 Once it arrives on our plates, processed corn ingredients also take a toll on our bodies. As previously mentioned, most beef is corn fed where prior to 1970 cattle were primarily grass fed. Grass-fed meet is much healthier for consumers: a grass fed T-bone steak has an average of 1.5 grams of fat while a corn fed T-bone steak has an average of 9 grams of saturated fat. Nearly 70% of processed corn is used to produce beverage sweeteners. As a country, we are drinking more calories now than at any time in history. Part of the reason for this is that corn syrup is a government subsidized sweetener and products that are sweetened with it are often cheaper than the healthier alternatives. Though corn syrup consumption alone cannot shoulder all of the blame for our skyrocketing obesity rates it is telling that the huge increases in corn syrup have coincided with the rising rates of obesity and adult onset diabetes. Recent research has suggested additionally that fructose is treated differently by our digestive systems. Michael Pollan in his well-known book In Defense of Food: An Eater’s Manifesto explains that the human body limits the rate of sucrose digestion based on the availability of the enzyme sucrase. Fructose, on the other hand does not require such an enzyme to be broken down and thus its digestion is not regulated by the body. Numbers of studies have implicated high fructose corn syrup in increasing the risk of type 2 diabetes and obesity. This has resulted in the corn industry pushing back with a public relations campaign to defend corn syrup consumption.


While there is certainly no simple solution to our nation’s obesity problem, one area where we could have a huge impact would be decreasing the amount of corn in our diet, both in the form of sweeteners and animal feed. Achieving this would require a change in agriculture policy, which points to the complexity of making national changes to our diets which rely on both personal choice and political will.

Additional sources not cited through links above: