It was 2001 and the summer after I graduated from high school and I was lucky enough to go on a six week long canoe trip in the Canadian territory of Nunavut. After paddling and seeing nobody other than the six other women I was with for over forty days, we ended our trip by paddling into the small Inuit community of Baker Lake. With no trees on the tundra, no buildings and no real sense of scale after so many days of traveling, Baker Lake Community, though small, looked like a major metropolis as we approached it.

Baker Lake is a small Inuit community located just south of the Arctic Circle. It is the geographical center of Canada and has a population of approximately 1700 (2006 Canadian Census 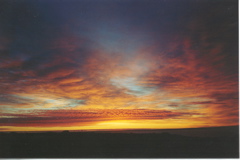 ). While Baker enjoys twenty three hours of sunlight in the summer, it sinks into darkness for most of the winter. Traditionally the Inuit in this particular area have utilized the summer months to hunt caribou and other small game. Additionally they fish, all in an effort to store up food and provisions for the long winter months. These foods still make up a large portion of their diet. However, Baker Lake and most other Inuit communities now grapple with changes in the caribou migration and changing nutrition habits due to the introduction of less traditional “Western” foods.

For me, arriving in Baker Lake after our long trip was a milestone. And, of course, after being on trail for as long as we had been, just about the only thing on our minds was what we would first get to EAT now that we had arrived at our destination. What could we find that hadn't been freeze dried? What hadn’t been dehydrated? Where and when could I get my hands on an apple? Or even a Snickers? Don’t get me wrong, we had far from starved on our trip, we were just tired of our limited camping food options.

So in true celebratory fashion, after setting up our camp at the small campground just outside town, we walked down the road and headed into 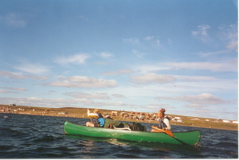 town to the grocery store. The grocery store came as a surprise. It was larger than I thought it would be, outrageously expensive and had a Kentucky Fried Chicken adjacent to it. I was stunned- first of all to see a KFC and second of all that a bucket of chicken was something close to twenty Canadian dollars. There wasn’t a single paved road in all of Baker Lake and most of the buildings were dilapidated. The airport was the only major form of transportation in or out of Baker. Yet, fast food had made its way North. Oh, and if you weren't in the mood for KFC, there was a Taco Bell across town.

Over the course of the next couple days we wandered in and out of town and met several local people. We had an entourage of local curious children and even some adults who accompanied us frequently. We later learned that the end of the summer in Baker Lake was always a fun time for the locals as many canoers and fishing trips passed through town - taking in the local scenery, supporting the local economy and particularly the local artisans. We were graciously invited into one family’s home. The house was empty. The family had no furniture other than their bed and a table so we sat on the floor. In the kitchen laid a caribou carcass that was partially frozen, a recent kill. We sampled the raw, frozen caribou and played games with the family while they told us stories and shared some photos with us.

After so many years I don’t remember the content of our conversations, but I do remember the stark emptiness of their home. I also remember casually 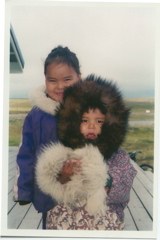 thinking “does this family really pay twenty bucks for a bucket of chicken from KFC?” I honestly don’t know the answer to that question. But the truth of the matter was KFC wasn’t that much more expensive than some of the fresh foods we found in the grocery store. So it wouldn't have surprised me one bit if they did, letting chicken quantity trump vegetable and fruit quality.

The memories of that trip live warmly in my heart. My interest in the Arctic and the native communities living up there only heightened after my trip. I paid close attention to the Arctic National Wildlife issue in Alaska for a few years and was enveloped in some of the more environmental issues associated with this area of the world. Only recently have I given more thought to food resources for these communities and how dramatically they have seemed to change over the past couple decades. 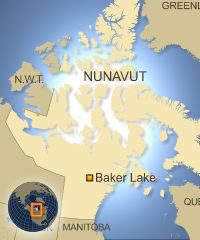 Food insecurity is a major issue in Canada. In 1998 roughly 10% of Canadian households were reported as food insecure and in 2004 up to 80% were reported as food insecure in the smaller Northern communities (Boult, Ajunnginiq Centre 2004). One initiative, the Food Mail Program, began in 2004 in an effort to bring more affordable fresh foods to the Northern Communities. The Food Mail Program seeks to subsidize mailing costs for fresh foods, namely fresh fruits and vegetables. This is meant to reduce the overall price of the foods for the buyer as well as improve the quality of the food (as faster delivery means better freshness).

The success of the program is debatable. While it has helped improve fresh food quality it has not dramatically decreased the cost. It is a program that is open to individuals but is mainly taken advantage of by food-shipping agencies. As of 2004, “individual accounts [made] up about five per cent of the program. The amount of paperwork and the need for a credit card limits the number of people who access the program.” (Boult, Ajunnginiq Centre Article 2004).

Regardless of the criticism, the program continues and its benefits seem to outweigh most negatives associated with it. The bigger question is whether such a program has any long term capability of remedying the food security crisis for this region. As fuel and mailing costs increase, will this be an effective and sustainable way to subsidize healthy food for these populations? It seems unlikely, but only time will tell. Luckily, further efforts to remedy this problem are taking shape. Just this fall, “Canada’s Minister of International Cooperation, Beverly Oda, unveiled the Canadian International Development Agency’s (CIDA) Food Security Strategy in an important step towards actualizing Canada’s pledge from the 2009 G8 summit. Canada has made global food security one of its key priorities.” (Adler, ONE 2009).

With hope, Canada's commitment to global food security will mean that they will start in their own backyard.

2006 Census of Canada. Available at: http://www12.statcan.ca/census-recensement/index-eng.cfm.

Boult, David A. "Hunger in the Arctic. Food (In) Security in Inuit Populations." A Discussion Paper. Ajunnginiq Centre 2004. Available at: http://www.naho.ca/inuit/english/documents/FoodSecurityPaper_final.pdf.