Food Wastage had become a food epidemic for humanity. While people in the G20 countries are enjoying food and dumping the “surplus”, people in less developed countries are suffering from malnutrition and are starving to death. Every year $43 billion worth of edible food is estimated to be discarded in the US alone.

One of the biggest wasters of food are supermarket chains. Million tones of food is being ploughed into USA’s landfill sites every year – all because it is much cheaper and easier for the supermarket industry to dump it than give it to those in need. It’s a immense waste when you consider that million tons of food is perfectly alright to eat. There is noting wrong with bruised fruit , but people would not buy it , even if there is not a bruise in sight some fruit is being binned because its is in the wrong shape and such foods are thrown away as nobody bought it.

I have had experience working in a hotel as a waiter before, and the waste each night is astounding. Food that is virtually left untouched is being thrown away. Even though the staff had done its part to salvage whatever food that could be salvaged, the leftover food is just too much for one to carry. I had asked about giving food to the homeless or needy and apparently they had done this but had stopped as homeless began camping up in front of the hotel, which interfered with the hotel operations. 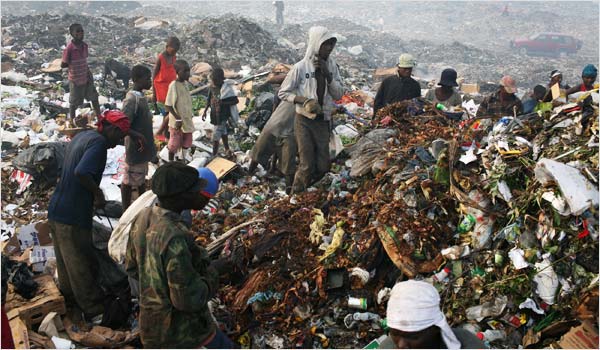 While people in the developed countries are having good access to food , people in less developed countries are dying because of food shortages . More than 25,000 people died of starvation every day in 2003 and about 800 million people were chronically undernourished. If only those wasted food could be shipped over and present an aid to them, this would seriously ease their suffering. [Editor's Note: Restaurant foods, packaged foods, expired foods---these are typically thrown away, and wouldn't survive a trip to a developed country. It would be rotten or inedible by the time it reached those in need. We need to work on generating LESS waste, and putting money and resources saved in that way toward programs that support sustainable food production in the developing world. Not a perfect solution, but a contribution toward a solution. ---J. Learn]

There are actually a few organization out there that is helping to take food that are dumped by the supermarket and “recycle” them for soup kitchens. Many businesses and corporations have already joined the fight against hunger. Corporations such as the Associated Food Dealers of Michigan, American Express, Boston Market, Kentucky Fried Chicken, Kraft Foods, Inc., Marriott International, Northwest Airlines, and Pizza Hut have formed coalitions with community-based food recovery programs to help their neighbors in need. There is organization called Food Lifeline, formerly known as Second Harvest, that specializes on giving food to the poor and needy. They need volunteers, food and money donations to keep their operation active. Even though such help exists, it is still not enough to curb the ever-growing hungry population. They would need every individual to help curb this ever-growing epidemic either through volunteer efforts, food donations or monetary donations. [Editor's Note: Permanent solutions to hunger have to include solutions to poverty---jobs, sustainable ways to produce food, equitable sharing of world resources. --J. Learn]

Below is a video about food wastage and hunger.


The video is about food wastage and hunger in the world.