It is difficult to figure out the present condition of the difficulty of obtaining food in North Korea. However, if we look at some information, we can guess that about 100-200 million-tons of food is scarce in each year.

2) THE REASONS FOR THE HUNGER

North Korea is likely to face a sho 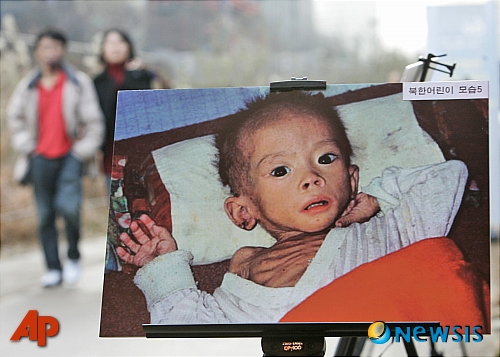 rtfall of more than 400,000 metric tons of food this year due to recent heavy floods, in spite of massive outside aid, a U.S. government funded radio station reported last year. Citing experts on North Korea, Voice of America reported that the communist country might run a deficit of 400,000 tons of food even if it receives aid from South Korea and the international community. Devastating floods are believed to have destroyed up to 14 percent of the North's farmland, South Korean officials said.

The number of dead and missing is estimated at more than 300, with the homeless numbering about 300,000. An estimated 46,580 homes of 88,400 families were destroyed or damaged, according to the North's media.


Not only that, the reasons for food shortages involves the social structure of North Korea. That is, they have difficulty with their economy, the impoverished conditions of the rural communities, and the lack of foreign currency (from aid) for food importation.


3) THE SOLUTION FOR THE HUNGER