The Gift That Keeps Giving by Ashley Durkin 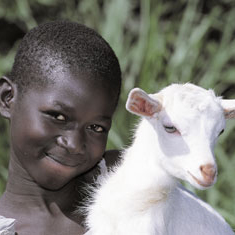 er International?
Heifer International is an organization that aims to end world hunger and poverty and create a caring earth. Heifer tries to obtain these goals by focusing on seven initiative areas: agroecology (land maintenance), animal well being, gender equality, HIV-AIDS, microenterprise (starting businesses), urban agriculture, and a young people’s initiative. By focusing on these areas, they can help bring communities out of poverty by providing them the tools and education necessary to sustain them. Heifer believes that education is the most important aspect of helping people become self-reliant, and although it is great to donate for the sake of poverty, those donations will be short lived if people don’t understand or have the resources to take advantage of those donations. Therefore, they dedicate themselves to teaching others how to create sustainability. For example, before an animal is given to a community, a project partner will go to the community and explain proper care and maintenance of that animal to ensure its health and longevity. Without this education, it is possible that the animal might die prematurely and only burden the family.
A Brief History
Heifer International, originally called Heifers for Relief, was started in 1944 by a man named Dan West. During the Spanish Civil war, West was working as a relief worker helping victims of war. He was faced with the difficult decision of who would receive food, when it came to him that these people needed a continued resource, rather than one meal. He decided that instead of giving milk to sick, starving children, he would give them cows, which would provide more than just one cup of milk. Since the first gift of cows in 1944 to a small village in Puerto Rico, Heifer has helped more than 8.5 million people worldwide in the fight against hunger.
What can you do to help?

Heifer is a program that recognizes the importance of sustainability. Rather than focusing on simply building a house for a family or providing clothing, they focus on providing lasting help. While it is important that people suffering from poverty have the other essentials to live, it is vastly important that they are able to support themselves; Heifer gives them the tools to do so.

Donations can be made in the form of purchasing animals or trees for a community, funding a project, or volunteering time to the organization. To see the potential impact that these gifts could have on a community, let’s take a look at what buying a heifer, one of the many animals available for donation, could provide: a dairy cow can provide four gallons of milk a day, which is enough to support a family and neighbors. Milk provides a vast amount of nutrition for starving children, and extra milk can be sold to help pay for other expenses a family might have. In addition, cows can have about one calf a year, providing the community with even more resources.

The potential impact of these gifts is outstanding. Gifts range in price from $20-$10,000, with each gift having the option to be shared and split amongst friends. The Heifer website allows you to purchase an animal directly or even set up a gift registry for alternate gift giving. So next time you think about giving gifts to your friends and family, think about the impact you could have on so many lives if you gave a community the gift of life in your friends and family's name—you might be surprise just how many people would benefit from the gift that keeps giving. For more information about how you can give the gift that keeps giving, visit the Heifer International website and view their online gift catalog.