It’s a reason for meeting up with friends, or simply an excuse for lingering outdoors, rain or shine. It’s a universal prop for people-watching in Paris, Istanbul, and especially in Seattle.

Coffee’s International Language
Whether it’s ‘kahve’ in Turkish, ‘qahwa’ in Arabic, ‘kaffee’ in Swedish, or ‘koohii’ in Japanese, coffee has its own international language, slang and songs – from ‘cuppa-joes,’ ‘brain juice,’ ‘tall-skinnys’ and ‘triple-shots’ to more than 700 YouTube video listings of “Java Jive,” a popular 1940s song about coffee.

Beyond coffee as an international culinary staple and cultural phenomenon, in moderation this beverage—derived from 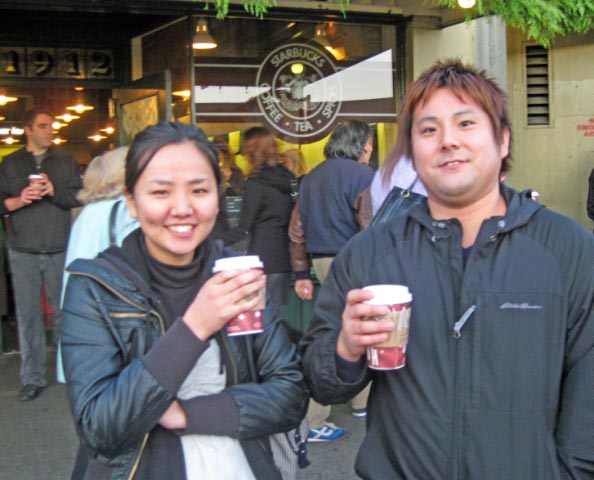 Coffee and Parkinson’s Disease
In a significant 30-year study (1) that tracked more than 8000 Japanese-American men in Honolulu, Hawaii, researchers found that men who drank 3-4 cups (28 ounces) of coffee a day reduced by one-fifth their chances of getting Parkinson’s disease. How can java jitters stave off Parkinson jitters? Researchers were cautious about these results published in 2000, wondering if caffeine somehow protected the brain from nerve damage related to Parkinson’s, such as producing more dopamine which is lacking in Parkinson’s disease. A few years later a similar study (2) over a period of 22 years indicated that coffee consumption, indeed, reduced the risk of Parkinson’s disease. For those who drank 10 or more cups of caffeinated coffee, their risk for getting Parkinson’s dropped by an astonishing 74 percent.

(Japanese tourists outside the original Starbucks in Seattle, WA.)

Coffee and Type 2 Diabetes
According to several studies, (3) coffee drinkers tend to have a lower risk of Type 2 diabetes. This is in large part due to antioxidants in coffee, rather than the presence of caffeine in the beverage. In one study, participants who drank four to six cups of a coffee a day reduced their risk or Type 2 diabetes by 28 percent. Those who drank more than six cups a day reduced their risk by a surprising 35 percent. In fact, one recent study (4) focusing on this disease found a correlation: the higher the consumption of coffee, the lower the risk of Type 2 diabetes. Given the steady increase of Type 2 diabetes in the United States, drinking coffee may be a useful strategy in staving off--or at least postponing--the onset of this chronic disease.

Coffee, Depression and Suicide
At one extreme, several studies (6) indicate that depressed persons benefit from drinking coffee. This is in part because caffeine sparks the brain's neurotransmitters to chemically lifts one's spirits, which are depressed in part by an imbalance of serotonin and dopamine. In a Harvard Medical School report, (7) researchers found a strong inverse relationship: the greater consumption of coffee by female participants in a long-term study, the less chance they committed suicide. Their findings suggested further investigation was merited into coffee's affect on or prevention of depression.

Coffee and Other Illnesses
However, it’s important to note that coffee is not a health elixir. Research shows caffeine decreases blood flow to the heart, and can increase heart problems, (5) blood pressure, and gastric disorders. Pregnant women are advised to limit their coffee intake to one or two cups a day. For most people, the key for drinking coffee is moderation – usually no more than two or three cups a day. 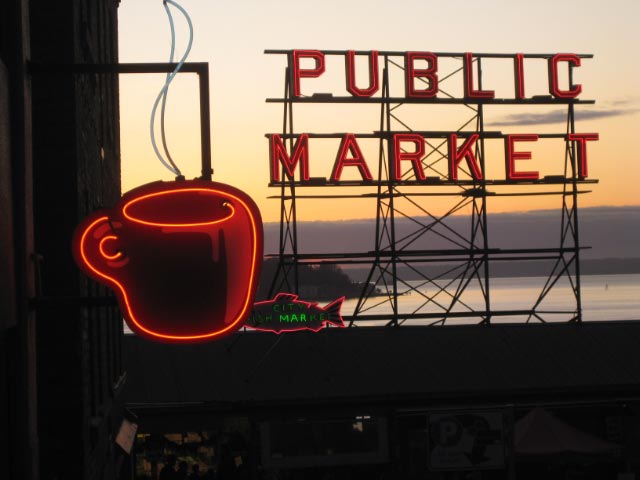 Coffee and Surviving Northwest Winters
It’s no wonder that the Pacific Northwest is home to the nation’s coffee culture. Few places in the world embrace coffee more than Seattle, Washington, with its culture of espresso stands, coffeehouses (wi-fi access!), and dozens of coffee roasters, from private-label to very public labels—Starbucks, for example. Somewhere in the middle of all these studies and research--if brisk business at Seattle's espresso stands is any indication--it's apparent that a hot shot of cappuccino does wonders for self-medicating (8) against dreary Northwest wintry days and weeks of endless rain and gray skies.

For those suffering from a local version of SAD (seasonal affective disorder) –often known as ‘wintertime blues’ with the Northwest’s lack of sunshine for days and weeks on end—grabbing a ‘cuppa java’ at the local coffeehouse can benefit not only one’s spirits, but one’s health as well.

(Note: All photos by Helen Holter)

8. “Depressive Symptoms and the Self-Reported Use of Alcohol, Caffeine, and Carbohydrates in Normal Volunteers and Four Groups of Psychiatric Outpatients.” American Journal of Psychiatry, 1993 Feb;150(2):294-301.