Marasmus, Kwashiorkor. My brother, my sister.
By Vienna Frykholm

It was 1983 and I was four (nearly five) when I met my brother and sister. They were adopted from Peru from two separate orphanages. They were both severely malnourished.

My brother: My brother was six months old at the time of his adoption. The orphanage he was in operated on the principle that the government would give them a certain amount of money for each baby they had. They had eight cribs in one room and as long as those eight cribs were full when the inspector came they got their money. Orphaned and abandoned babies were easy to find in Lima due to the civil unrest and poverty. The need to feed the babies was therefore eliminated. When one starved to death they could easily find another to take its place. My mother wanted to take them all home but since she had to choose only one she was advised to take the one with the most chance of survival. When my dad walked in from the car carrying my brother in one hand and my sister on his hip I was shocked. To me it didn’t look like my new brother was going to survive at all. He was literally skin and bones; I could barely find him in the car seat he was all bundled up in. When my mom had me sit down in the big brown chair so I could hold him for a while he felt like a feather. He never fussed even when I poked at him more than I should have. I went with my mom to all of his pediatric appointments. I couldn’t understand everything that was going on but I knew that he was on a special diet, which confused me because I thought dieting was for people who wanted to loose weight not for a very skinny baby. I knew they ran tests to check on his heart, lungs and tummy. I knew that they said he was lucky and going to be ok in the long run and I knew my mother worried about him a lot. Now I know that he had been diagnosed with Marasmus, a type of malnutrition. His physical appearance and demeanor were examples of visible signs of Marasmus. Internally his muscles hadn’t formed like they should have. He had weak and semi-wasted muscles in his extremities. His heart turned out to be ok but it was of some concern for the first few years with the doctors worried that it had suffered the effects of malnutrition and would be weak. The lining of his intestines had been damaged and he got a couple of infections in his GI tract. Now he is 25 and he just completed his first marathon. He feels none of the effects of being malnourished for the first 6 months of his life but when we look at the pictures of me on the big brown chair holding him we are both amazed that he did so well.

My sister: My sister was three (or so they guessed from her dental development) when she was adopted. She was from a much better run orphanage, but even so it didn’t have the resources to properly feed the children. She had been 12-14 months old when her mother dropped her off at the orphanage to pursue her “career”. During my parents interview with her they noticed that she had a swollen belly and upper torso but tiny little legs and arms. The translator explained that the well water carried parasites and the orphanage couldn’t afford the treated city water so most of the kids had swollen bellies due to being infected with parasites. When I saw her walk in the door with my father she was obviously in pain. They had started the medication to get rid of the parasites but it gave her diarrhea and after traveling so far she was tired and sick. She had never had a haircut but her hair was short because it broke off very easily (as I unfortunately found out when I tried to brush it). I remember that she had to have a smelly ointment put on lesions that had formed on her arms and back. She looked old enough to eat the same food I did but she was fed much differently. She got soft foods like applesauce, yoghurt and even some baby food. My mom said her stomach couldn’t handle the same foods mine could because of how she was fed in Peru. I can remember having to collect stool samples to check for parasites and worms. I actually took a stool sample, without my mother’s knowledge, to school for show and tell so I could show my classmates how we had to check my sister for worms. My teacher was not impressed. We took the stool samples into the pediatrician every week until all signs of parasites were gone. My sister still had the swollen belly though. This is a typical sign of malnutrition known as Kwashiorkor which she was then diagnosed with. Over time the edema went away but she was left with a distorted rib cage due to her body developing while swollen. Now she is 28 and still carries some of the effects of having been malnourished. She has a hard time with body image and struggles with food. Thankfully she is physically healthy though and leads a very active and full life.

I learned a lot from my brother and sister. Prior to them being adopted I had lived in a very small and sheltered world. It was a shock to find out about life outside of my world. Granted I was very young when they were adopted but over the years we, as a family, have gone to Central America and I have seen again and again poverty and malnutrition. I have started going to Central America by myself with non-profit medical groups to give free clinics to those in need. It still moves me to see people living in such desperation. I want to retire in Guatemala where civil unrest, poverty and a lack of education have led to a great number of orphans. I want to start an orphanage there and run it for the good of the children making sure that nutrition and healthcare are a part of their lives. It will be for my brother and my sister. 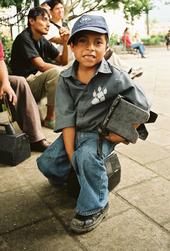 This is Juan, he is a child in Guatemala that I met while there a few months ago. He shines shoes in Antigua to help his family make ends meet. He is hiding his hands because they are stained black from the polish and he is embarassed about it. Juan eats once a day.