Originally from China, sushi was introduced to Japan in the 7th century. Bounded by ocean, seafood has become Japan's primary food besides rice. This describes how sushi, as the combination on seafood and rice, becomes so popular in Japan. When there were no refrigerators, people had the idea of making sushi to preserve fish by fermentation . In order to ferment fish, salt and rice were needed as sushi plays an important role in Japan. “Is sushi equal to raw fish?” This is probably the first thing that comes in mind when people think about sushi. The answer is No. Sashimi is the Japanese term of raw fish, while sushi is raw fish with sushi rice. In the process of making sushi rice, sweet rice wine vinegar is used as the seasoning. Although raw fish is the main ingredient of sushi, there are a lot of different sushi that don't contain raw fish. Some of them are fried, baked, and seared. The most popular ingredient of sushi is salmon. It contains omega-3, is high in protein, and can be served raw or seared.

As sushi becomes more popular, there are serious concerns about the extinction of fishes that are used in sushi. Ordering seafood that are sustainably caught or farmed is one easy way to help. Some of the best choices are Gindara fish, Salmon roe, Oysters, Scallops and Mackerel. They are some sustainable sushi fillings that surely will satisfy human's senses as well. There are popular sushi restaurants that already serve these kinds of sushi. Wasabi Bistro, Umisake Sushi House, and Sushi Land are some examples in Seattle. Bluefin tuna is close to becoming extinct since it is commonly used as sushi fillings. The high demand of customers leads to the higher price of this kind of sushi. Unfortunately, it does not stop people from ordering it. Instead of oreding bluefin tuna, you can substitute it with albacore tuna, which tastes similar.

Sushi has always been one of the top list of healthy food. It is low in fat and cholesterol and high in protein. It is very nutritious food as it has varieties of ingredients. A typical setting of 7 to 9 pieces contains about 300-450 calories. Good source of omega-3 fatty acids, fish is the most nutritious ingredients used in sushi. Sushi also satisfies body's needs of fiber as vegetables are also used. Morover, rice provides the complex carbohydrates our body needs, while seaweed provides iodine . Imagine how may different kind of food there are in just one piece of sushi. Each of them contains different vitamins and minerals, which are essential for human body's health. From all various kinds of sushi, some of the popular ones are: 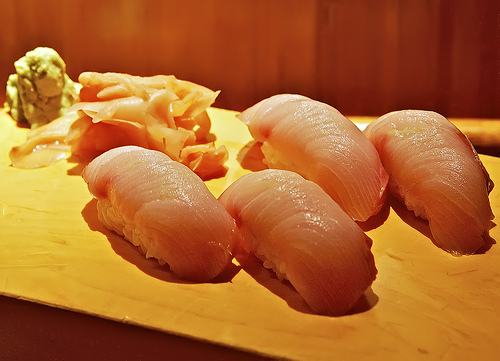 Nigiri sushi contains of small rice balls with fish, shellfish, or any other ingredients on top. Salmon, shrimp, tuna, eel, squid, octopus and fried egg are the most common ingredients used.

1. Slice the fish of your choice into bite sized pieces.
2. Put a small amount of wasabi on one of the fish side.
3. Moisten with water, put the sushi rice in your palm.
4. Press the fish onto the rice firmly and shape it like an oblong.
5. Nigiri sushi is ready to be served with soy sauce and wasabi. 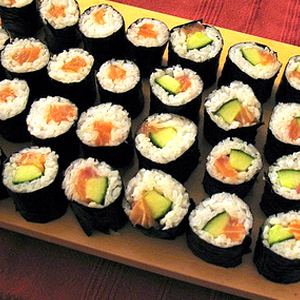 Maki sushi contains of seafood and misini sushi rice balls, rolled in dried seaweed sheets. Compared to the size of nigiri, maki sushi is about 1/3 of it. There are usually 6 small pieces of cutted roll in one serving plate. 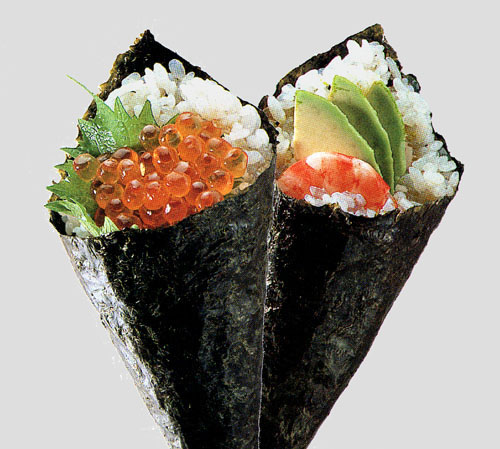 Out of all three popular sushi, temaki sushi is the most popular to be made at home. It is so easy to make temaki sushi because you won't need a rolling mat for the seaweed. With various ingredients in the middle, it looks like a cone, surrounded by a Nori sheet (Japanese seaweed).

1. Put a sheet of nori on your palm spread the sushi rice over half of it.
2. Put cucumber, crabtick, avocado and mayonnaise diagonally on the rice.
3. Close in your fingers to let the nori fold in together, joining 2 side of the rice together and roll in the rest of the nori so it looks like a cone.
4. Sprinkle some tobiko on top and serve.

On top of all these ingredients, the most important thing to have concern in is how you make the sushi rice. Here are some tips for it :

* It is best to add the vinegar mixture when the rice is still hot.
* To get the shinny looking sushi rice, quickly cool the rice.
* With a cut and fold motion, use a spatula to mix the rice. This will prevent you from smashing the rice grains.


Here is a simple tutorial video of how to make sushi. I hope you can try it at home. Good luck!


Here are some helpful resources to get the complete information about sushi :