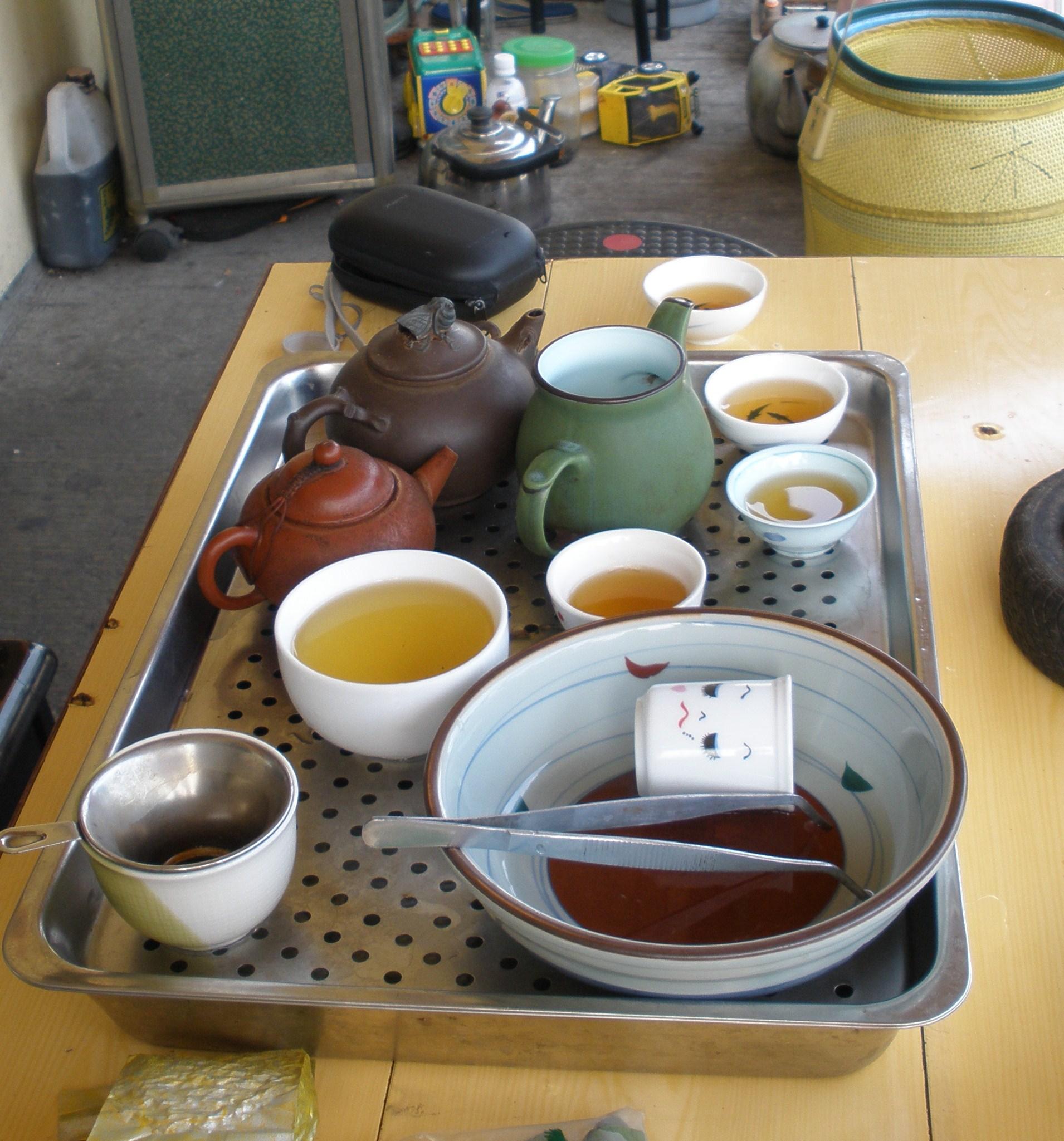 You can’t live in Taiwan and not be fascinated by the ubiquitous nature of tea. I have become so captivated with the tea culture in Taiwan. All towns, both big and small, have at least one sometimes up to five teashops on just about every street. Tea is offered at all family gatherings, holidays, funerals, weddings, business negotiations, in waiting rooms at hospitals, clinics, and car repair shops, as well as a sweet way of welcoming and conversing with friends, family, and even strangers who visit your home. Taiwanese people soak in tea water at the spas and tea is commonly a secret ingredient of some local treats and delicacies. On cold days it is a quick and easy way to warm up and feel cozy and during the incessant heat of the summer, an icy cup of tea is often more refreshing than water. Second only to water, tea is the most popular drink worldwide, unbelievably healthy, and to many, particularly in the East , is nothing short of an art form.

It is said that tea originated in the China in 2737 B.C. while Emperor Shen Nung was traveling. When his caravan had stopped for a rest he told a servant to go and get him some water. He required all drinking water to be boiled first. While the servant was boiling the water he did not notice that a dead leaf from a nearby tea bush had fallen into the water. Despite its murky color, the emperor drank the water. He was pleasantly surprised finding the unique drink very refreshing. Thus, tea was born. Since that time tea has taken on many forms including as a tea brick (Tang dynasty), white powder (Song dynasty), as loose leaf (Ming dynasty) and finally as the modern form (Qing dynasty) in which an intricate process of drying, oxidizing, condensing and heating is used. It is this current process of tea production that I would like to share. 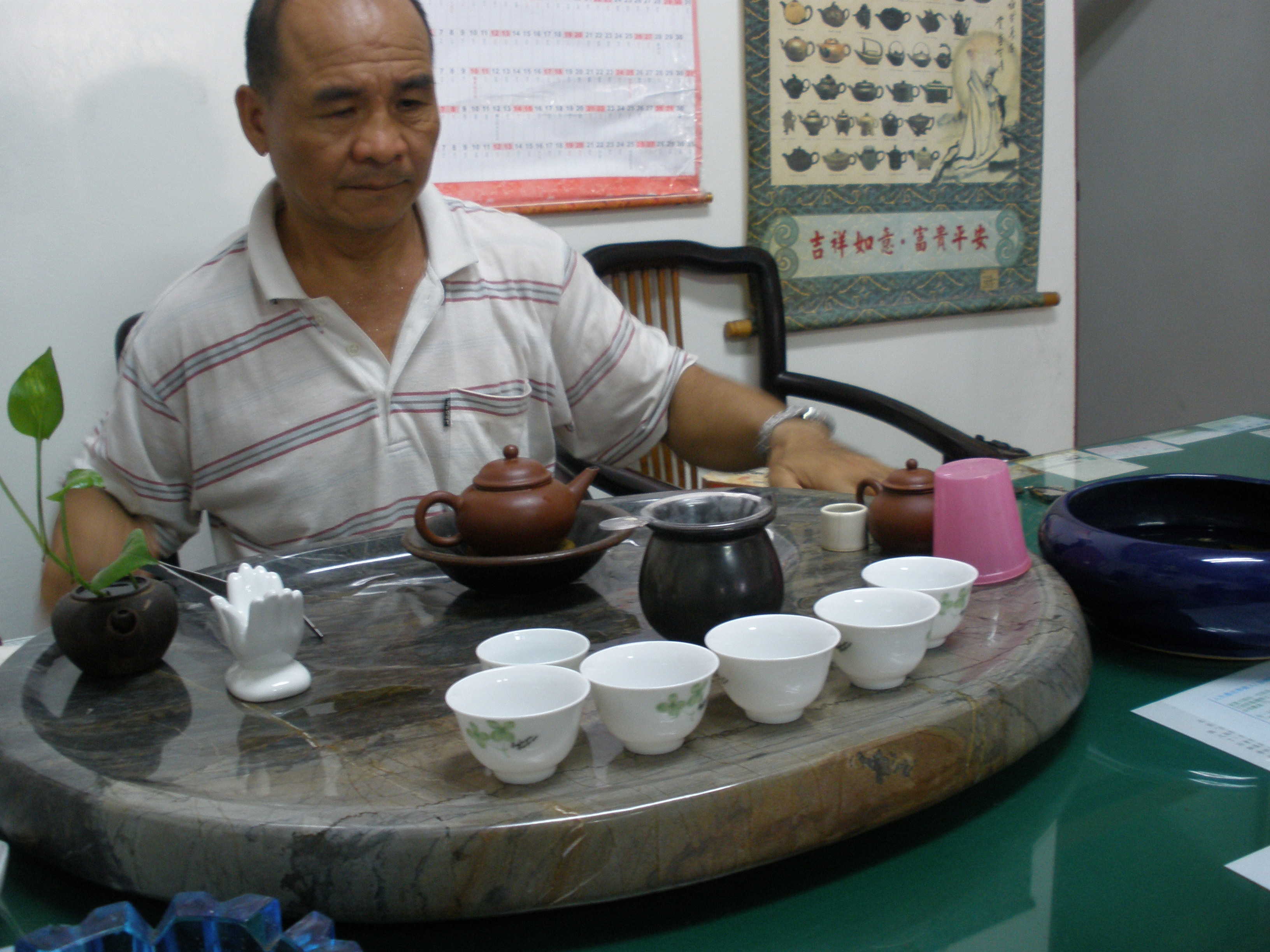 In an effort to learn about this interesting process first hand, I spent the better part of a day in a valley called Lu Gu in Central Taiwan, not too far from where I live. This area is said to grow the best oolong tea in all of Taiwan. During my visit I learned how tea is grown, processed and brewed from a local tea producer and the area's highly regarded "tea master" as they refer to him. 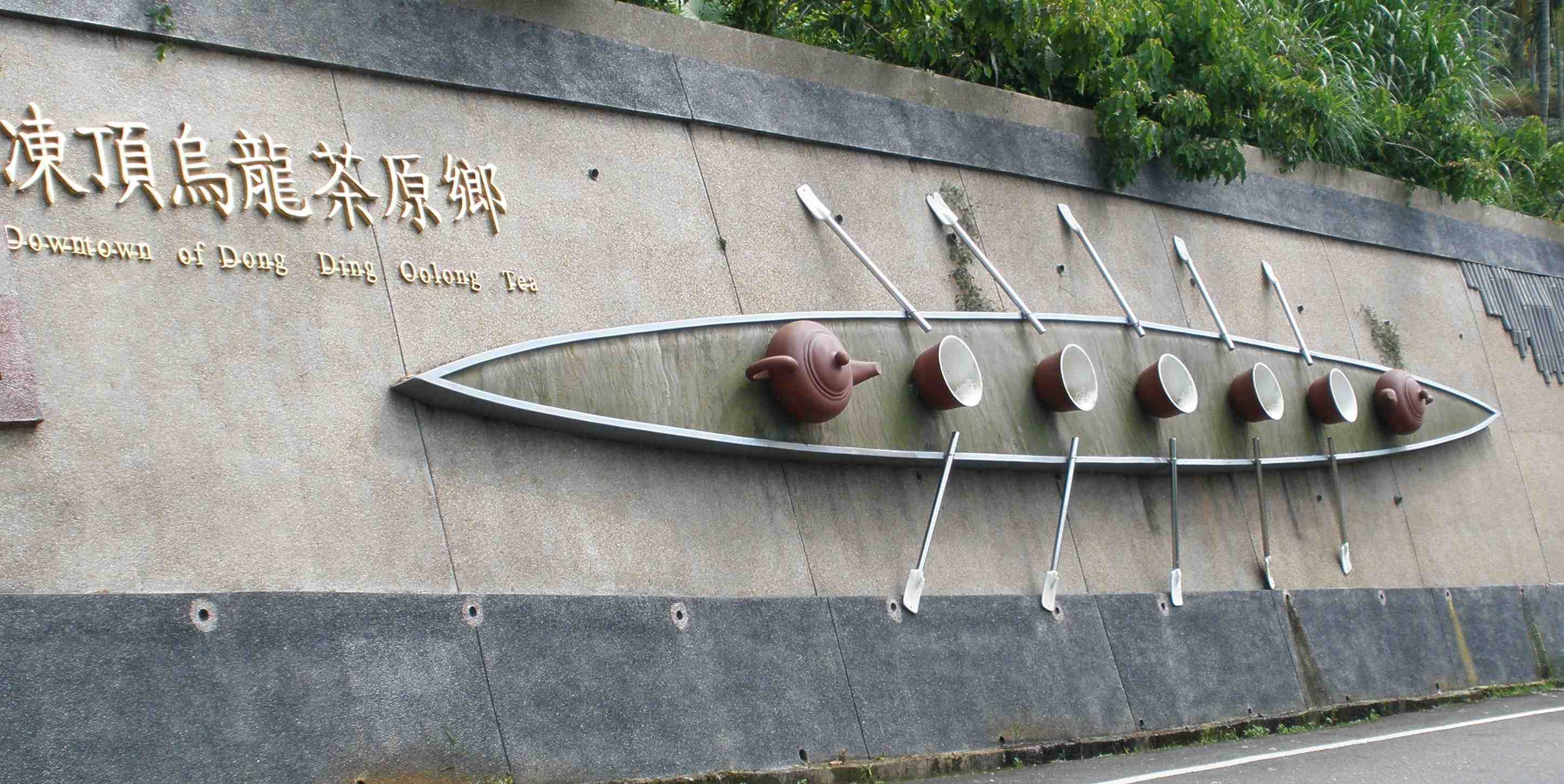 Growing: The three most important aspects of growing tea are climate, soil and altitude. Taiwan’s year-round sub-tropical temperatures, high level of moisture, and its position along the Tropic of Cancer all make for a great climate and very fertile soil, which are vital to growing high quality tea. Yet, it is probably Taiwan’s surprisingly mountainous terrain that is its greatest natural asset. The cool, moist air of higher elevations helps the tea grow more slowly giving it a more robust and rich flavor. Further, the steep terraced fields that cover the mountainsides have bedrock, which is better at holding water than the flat fields of the valleys. Also, the giant stair shape of the fields allows water to move gradually from top to bottom, tea bush to tea bush. Taiwan’s rain is notably heavy and hard, especially during summer when typhoons frequent the island. Without this special field structure the rainwater would come and go too hard and fast making it difficult for the tea plants to soak up the water. 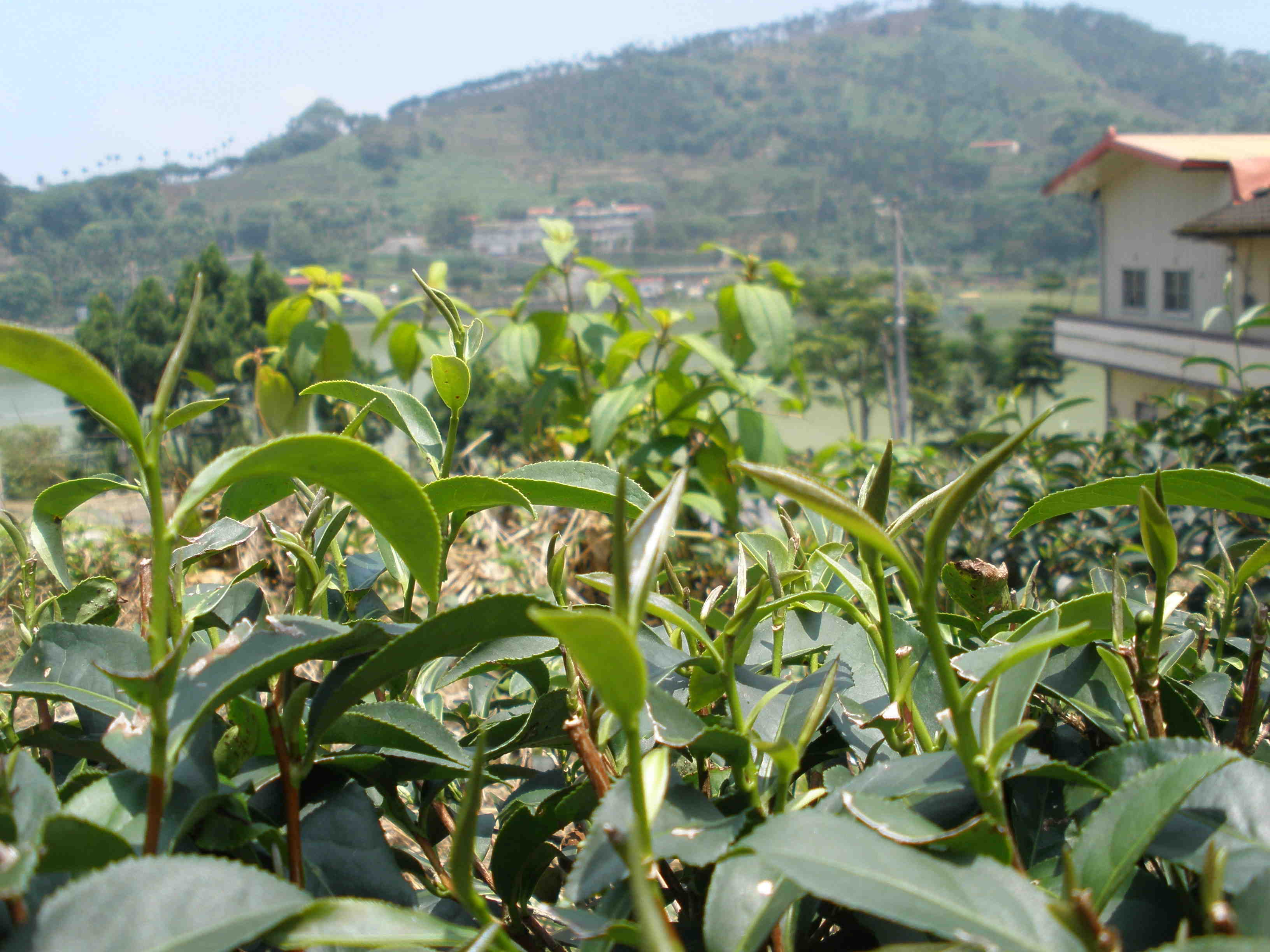 Generally, processing tea takes about two to three days depending on what type of tea is desired. The three popular teas in Taiwan are black tea (called red tea in Taiwan), green tea and perhaps the most well known and the one that Taiwan is most proud of, oolong tea (meaning “Black Dragon” in Chinese). Interestingly, most tea comes from one plant called Camellia sinensis, which is an evergreen native to China. The numerous varieties of tea are due to the different processing methods. For example, whereas black tea is the strongest because it is allowed to ferment or oxidize longer, which also gives it its darker color, green tea is much weaker because it skips the step of fermentation and instead the leaves are steamed (heated) right away. Oolong tea falls in the middle as a combination of black and green teas. It is slightly fermented giving it a distinct flavor that is neither as strong as black tea nor as light as green tea.


Picking: The harvest season is spring, fall and winter (winter yielding the best leaves). Summer is too hot. The time of harvest is decided by the lunar calendar. Each month there are two days that are most important to tea farmers. These days are marked by the disappearance of a moon and by when the new moon is at its fullest size. Accordingly, the tea is picked a week before and after these two significant days.

Tea is fairly easy to pick, or pluck as some like to refer to it. The people I met with said that they could pick all the tea in the course of a morning. Of course, this is with the help of about 15 other pickers. A picker only need survey the top of a tea bush to find the new buds (called terminal buds) and its three surrounding leaves. The leaf is broken off at the point on the stalk just below the lowest third leaf. The juice of the tea is in the stalk, not the leaves. However, it is the combination of the leaves and stalk during processing that gives tea its flavor. After the tea is picked it is loaded into bamboo baskets and then immediately directed to the next step, oxidation, which is probably the most sensitive of all the steps.

Oxidation: It is commonly called fermentation in Taiwan. Oxidation is basically when the leaves wilt because of water loss and become darker in color. Inside the tea plant, the chlorophyll is enzymatically breaking down and in so doing the tannins are released or changed giving it a dark color. Oxidation can be achieved and/or sped up by leaving tealeaves in a sealed room, tumbling them around in baskets, or kneading them by hand. The duration of oxidation is up to the tea producer; 100% oxidation leads to black tea, 60-70% results in a darker oolong tea, and no oxidation yields green tea.

Heating: This is basically used to stop oxidation. The heat deactivates the oxidizing chemicals without harming the flavor of the tea. Long ago tealeaves were steamed. These days large heating machines bake the leaves or some growers like those that I met use large rolling drums. 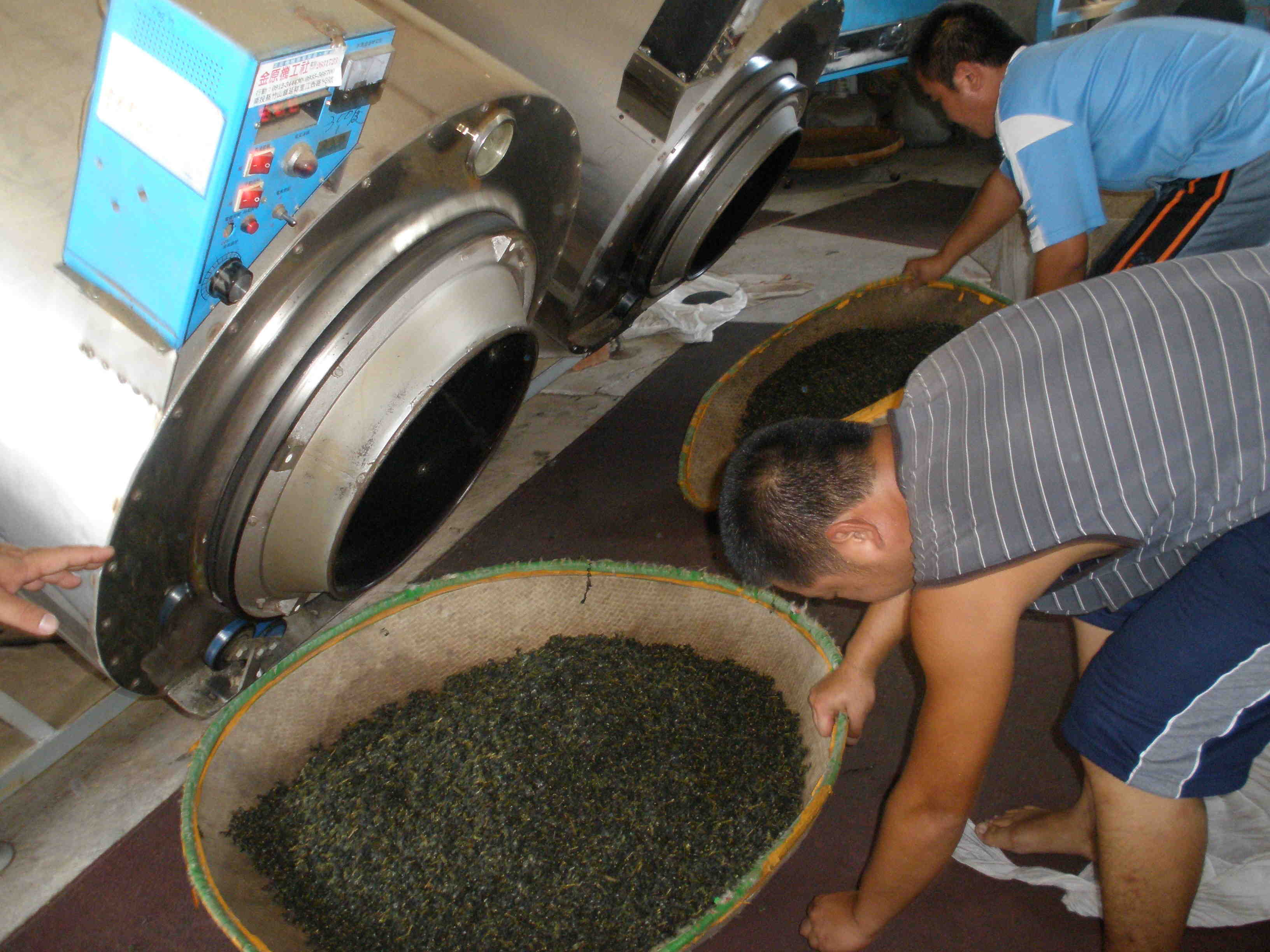 Shaping: The damp leaves are then rolled into the wrinkled strips that we know as loose tea. This is a very tiring step for the producers, particularly when making oolong tea. Over and over again the damp tealeaves are removed from large drums, put into large cloth bags, and either by hand or machine are pressed and spun over and over again. This step of loading and unloading big bags of leaves can be repeated as many as 60 times to get the desired shape. Whereas a tight-coiled shape is important to the quality of oolong tea, green tea is not kneaded at all.

Drying: The final step that prepares the tea for sale is drying. It can be done in many ways such as sunning, panning, air drying or baking. It is important that the tealeaves are not overcooked.

Now I would like to discuss the health benefits of tea. Tea is not only culturally interesting, brings people together, warms and cools our bodies, but also it is down right healthy! This is especially true for green tea because without going through the step of oxidization like black and oolong teas it maintains its abundant and naturally healthy properties.

10 reasons to drink tea are as follows…
Reason no. 1: Tea can fight cancer. This is especially true for green tea, which has been found to help stop the growth of cancerous cells. One particularly potent antioxidant called EGCG has been found to actively kill cancerous cells and remove existing ones, notably protecting drinkers from lung, breast and prostate cancers. It is comforting to know that there is another preventative (and tasty) measure we can all use to fight cancer.
Reason no. 2: Tea can help with weight loss and fight obesity. Drinking tea increases metabolism and stimulates the nervous system to convert fat into usable energy, called thermogenesis. It can also curb hunger. Antioxidants in the tea, called catechins, not only metabolize fat, but also prevent its build up by inhibiting the production of some digestive enzymes. Further, as a diuretic, tea can rid the body of excess water, as well as destroy and release bacteria and toxins from the body.
Reason no. 3: Tea can assist in the prevention of diabetes. It slows the breakdown of sugar that goes into the bloodstream. Polyphenols and polysaccharine, which are two more antioxidants found in green tea, have been found to lower blood sugar levels in the body.
Reason no. 4: Tea can thin the blood. Instead of using aspirin or other medications, tea can be a good natural alternative. This is especially good news for people who like to travel and run the risk of getting deep vein thrombosis. It can also help prevent and cure headaches, not to mention combat depression.
Reason no. 5: Tea can lessen the painful effects of arthritis. The antioxidants help to block enzymes that attack and destroy bones.
Reason no. 6: Tea can fight aging by acting as a remover of free radicals in the body. The longest living people on Earth, the Japanese, drink lots of tea and are proof of this. Also, many anti-aging products use tea-extracts because they have been shown to reduce wrinkles and make people look younger.
Reason no. 7: Tea can speed up the growth of good bacteria, thus lessening the harmful effects of bad bacteria. It may even prevent viral strains of clostridia and E. coli.
Reason no. 8: Tea can prevent tooth decay by combating the formation of plaque and tartar. It also contains fluoride, which is important for maintaining healthy teeth. No need to buy mouthwash, just drink tea!
Reason no. 9: Tea helps reduce cholesterol and the risk of strokes and heart disease. The catechins in tea and its unique ability to widen the arteries play a role in keeping the heart healthy. Further, tea improves the ratio of HDL to LDL by inhibiting the oxidation of LDL cholesterol.
Reason no. 10: Tea has half the caffeine of coffee, so it can be drunk all day without the consumer feeling the heart racing, nervousness, insomnia and jittery effects often associated with coffee.

Although long ago considered a sign of status, and often associated with intellectuals, today, tea is making a come back for all kinds of people. This is not only due to its long history in Europe, India and all over Asia, but also its uncanny way of encouraging conversation and warmth between people, but also and most importantly due to its countless incredible and natural health benefits.