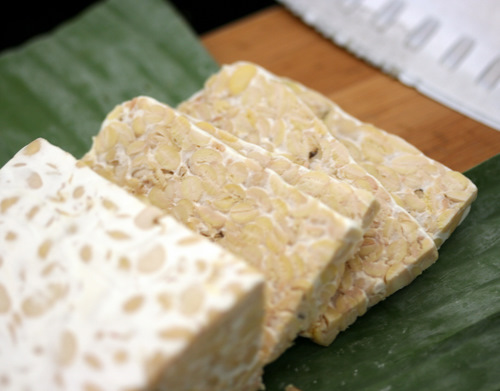 Tempeh, or in Java we called it tempe, is an Indonesian traditional food. It is one of the common traditional foods that Indonesian people eat every day. Tempeh originally comes from Indonesia. Tempeh has been produced and consumed since around the 16th century. Actually the Chinese people made a similar product which was dehulled soybeans with aspergillus mold. It became the inspiration of Indonesia people to create tempeh. The name "Tempeh" was used in 1875. In the 20th century tempeh’s popularity has grown in Indonesia, and elsewhere.

Tempeh is made from soybeans which have been cooked, mixed, dehulled with a tempeh starter and incubated for about a day or two. The white mycelium (from the mold) makes the soybeans stick together to form a solid cake. Because tempeh is made from whole soybeans, so it is considered a fiber-rich food. Tempeh contains a lot of proteins, minerals, soy isoflavones and saponins. It also contains many sources of nutrients like calcium, iron, and B-vitamins. Tempeh is a very good resource for monosaturated fat and it doesn’t contain any cholesterol.

The natural process to create tempeh makes the soya easy to digest. To make tempeh is quite easy especially if you like to do gardening you can make it about a few days. If you’re often eat homemade tempeh or store-bought tempeh, you will notice the big different between both of those. Homemade tempeh tastes and smells a lot better; it smells like mushrooms, but after a few days storage in fridge the smells will be like chemical a little bit. You need to add some acid to the soybeans to prevent bacteria growing in the soybeans. For tempeh makers in Indonesia, they don’t need to add acid instead they let the soybeans acidify naturally which occurs from soaking in water. Tempeh is an excellent addition to a variety of foods. We can make tempeh in many variations. The easiest way to prepare it is by baking marinated slices of tempeh in a pan with oil until it becomes crisp and golden-brown. We also can grill it by steaming the tempeh cubes and marinate it in a barbecue sauce and then grill until browned. As Tempeh becomes more famous all around the world, many vegetarian people are starting to use tempeh as a replacement for meat. Tempeh is produced not only in Indonesia, but all around the world. Countries like Germany, Japan, USA, and Indonesia right now try to make better Rhizopus to create tempeh faster, with better quality, and to increase the nutrition of tempeh.

Step by Step to Make Tempeh

Step 1: Ingredients
We need about 500g whole soya beans, a few tablespoons of vinegar and a bit of tempeh starter to make 1kg of tempeh. Tempeh starter contains spores of Rhizopus oligosporus or Rhyzopus oryzae or we can use both of those.
Step 2: Soaking and dehulling soya beans
Whole soybeans can be dehulled by soaking the beans for about 8-14 hours in water and then we have to remove the hulls by hand. To do it, we have to split the soybeans into two and the seed coats can be removed.
Step 3: Cooking the dehulled beans
We cooked the dehulled beans for about 15-20 minutes. Drain and remove the cooked beans onto towels to drain and cool the soybeans. It becomes soft and swollen right now. This step is very important because the soybeans need to be very dry; otherwise bacteria can grow and destroy the flavor.
Step 4: Inoculating the dehulled beans
Now put the dry and cool beans in a clean container. Sprinkle the soybeans with 1 teaspoon of tempeh starter and mix it.
Step 5: Incubating the beans
Take 2 plastic bags and put holes into the plastic bags every 1 cm; now divide the soybeans in the two bags and seal them. Press them until flat; make sure the thickness is less than 3cm. Put the packed soybeans inside an incubator for 30°C or put at warm place for about 24-48 hours until the packed soybeans is filled completely with white mycelium and it can be lifted as a whole piece. The fresh tempeh will feel very warm and smells like mushroom. It can be stored no more than 7 days or a few months inside the freezer.

Tempeh Recipes
Barbecued Tempeh
Ingredients
500 g Fresh Tempeh
1 Cup Barbecue Sauce
1 Large onion
Step By Step:
1. Cut the tempeh in pieces of 2-3 cm. Steam about 20 min, after 20 minutes put the tempeh in a dish together with the chopped onions and barbecue sauce.
2. Put inside the fridge for a few hours
3. Barbecue on a grill until brown and crisp 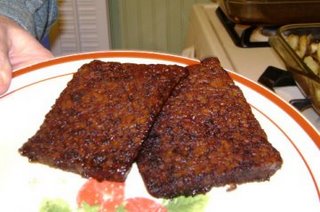 Fried Tempeh
Ingredients:
400 g Fresh tempeh
1clove garlic, peeled and crushed
4Tbs oil
1/4tsp salt
Step By Step:
1. Cut the tempeh in slices of 5-1 mm (the thinner the crispier they become).
2. Put the oil and garlic in a skillet and bake the tempeh slices on both sides until crispy and golden brown. Don’t forget to sprinkle with the salt 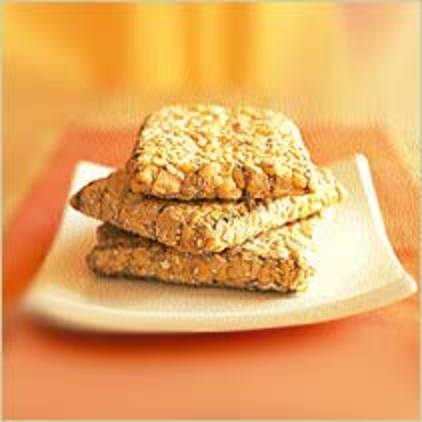