Soy has become increasingly popular in recent decades and is found in a great variety of products. It is found in whole foods, such as soymilk, tempe, tofu, soy yogurts, and miso, but is also a common additive. Soy derivatives, along with corn, are often used as food preservatives. In addition, soybean oil is often used as an alternative to vegetable and canola oils and accounts for 79% of edible fats consumed in the US. Soy is found in mayonnaise, salad dressings, margarines, and vegetables shortenings. It is even used in candles, lotions, cosmetics, and clothing. Soy is everywhere.

In recent decades, soy has gained enormous popularity in the United States. Its first common use was as a base for baby formula in the early 20th century. Soymilk began to gain popularity and became a commercial product after WWI. The US, along with Brazil, is now one of the world’s biggest soy manufacturers. In 2000, 15% of the US population ate soy in the form of whole foods regularly and over 2/3 of the population believe it is a very healthy alternative to meat. Much of soy’s recent popularity is due to the manner in which it has been marketed. It was been presented as a heart healthy, low fat, environmentally friendly alternative to meat and dairy products.

Is soy really as healthy as it is claimed to be? There are many benefits to the product. It is a complete protein, providing all the essential amino acids the human diet requires and is high in fiber. It has been associated with a reduced risk of heart disease, being low in saturated fat, lowering LDL cholesterol, and maintaining high levels of HDL. Consuming 25 g of soy protein per day is thought 20 lower blood cholesterol by 10%.

While the benefits are extensive, it is also important to consider the possible hazards of a high soy diet. The most common health concern is about the effects of the phytoestrogens which soy contains. Phytoestrogens are compounds that protect the plant against microorganisms and fungi. The worry is that these phytoestrogens mimic estrogen in the human body. Some phytoestrogens may act as an inhibitor for thyroid peroxidase, contributing to the development of goiter and autoimmune disorders. Research also suggests that these phytoestrogens may promote breast cancer in women with estrogen-sensitive cancers, affect brain function, and lead to developmental abnormalities in infants. A study in which a group of women consumed 60 g of soy protein everyday for a month disrupted the menstrual cycle for up to three months. Women with a history or high risk of breast cancer should be wary of extensive soy consumption. The effects of phytoestrogen are especially a concern in soy-based formulas and supplements. Infants are more sensitive to the effects of the hormone and the effects are magnified. In rats, soy formula has been shown to disrupt ovular development by inhibiting oocytes from separating and may cause irregular menstrual cycles during early development, and may cause the growth of breast tissue in males. When possible, soy formula should be avoided.

The environmental impact of such extensive soy production can be devastating. Soy crops have contributed to extensive deforestation in Brazil. Every year, Brazil opens a new soy crop the size of Maryland. This massive deforestation is contributing to global warming and climate change. Soy crops in both the US and Brazil are also drastically decreasing biodiversity. Soy is often an alternative with corn, allowing nothing else to grow in the area.
Ultimately, the answer to soy seems to be moderation. Like many other foods, it is over consumption that is the problem. When eating a meat and dairy free diet, it is important to substitute in other sources of protein in addition to soy, such as beans and rice (which makes a complete protein). Over-consumption may have harmful physical and environmental effects. 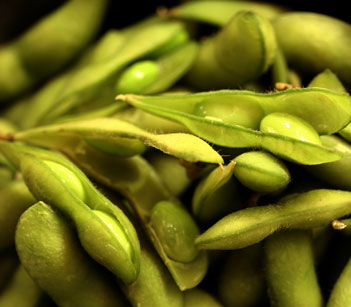