The Exquisite Taste of Ethiopian Food By Abraham Tsegaye

Ethiopia is one of those countries that are unique in many ways; from their ways of life and culture, to their food. The unique food and dishes are varied and well-known for their delicacy, tempting anyone whether they are hungry or not.
Visitors can always find a wide selection of restaurants to pick from: ranging from Indian and Chinese to European or American cuisine. But Ethiopian cuisine and the style of presentation makes it aboriginal and unique, as it is for many countries around the world.

A person rarely ever leaves one’s house without eating, whether you are a guest or not. The host brings water caught in a special bowl for the guests to wash their hands with before eating. As a mark of great friendship, you will find the custom of ‘gursha’ given, which is usually performed at least twice. The host picks a taste of the food and directly feeds you by putting it into your mouth. 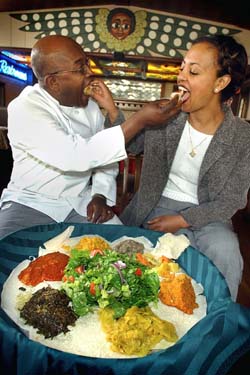 Injera is the main food that serves as the essence of every meal. It is spread out like a large thin tortilla and served in a basket made of straw, known as the mesob; with different kinds of wot (sauces) put on top of it. This is not to be mistaken for a table cloth, as has been done by many of my American friends!

Injera is made out of teff flour, which is very rich in iron. It is traditionally eaten in Ethiopia, Eritrea, Somalia, and some neighboring countries. It is made in a traditional way in which flour is mixed with water and then fermented for several days. It is due to this reason that injera has a slightly sour taste to it. It is then baked into large flat shapes, which either can be done on a specialized electric stove or more traditionally, on the mogogo, which is a plate made of clay, and then placed over a fire. The shape of Injera is similar to that of the Mexican burrito or enchilada and the French crepe as a round tortilla-like flatbread used as a base for the wot (sauce). Together with the wot, injera is similar to the South Indian dosa. However, the flavor and essence are quite different and it is therefore unlike the Indian or Mexican flat breads.

An assortment of sauces, salads or stews and extra slices of injera, are served along upon the injera. It is then eaten by tearing small pieces of injera and using it to grasp the stews and salads. The sauce and flavors of the foods is absorbed by the injera under these stews. When the stews and salads are finished, the last injera is also eaten. Therefore, injera serves as food, utensil, and plate.

Outside of the Ethiopia, injera can be found in grocery stores as well as restaurants specializing in Ethiopian, Somali or Eritrean foods.

Doro-wot and Shiro-wot
Doro-wot are considered to be the most sophisticated and is regarded as close to the national dish of Ethiopia. It has a unique, savory and exotic taste as well as an aroma that stimulates the appetite. Tender chicken is cut into twelve pieces, along with hard-boiled eggs, is served in a hot sauce of butter, onion, chili, cardamom and berbere (hot powdered red-pepper). A vegetarian alternative to the doro-wot is the shiro-wot. It is made of beans lightly spiced and is accompanied by other vegetables. This dish is often served on days of fasting.

Coffee
Ethiopians are proud to be from the original home of coffee. The coffee ceremony is one not to be missed to properly complete an exotic experience of Ethiopia. High quality coffee is still produced today, noted for its flavor and often blended with other fine coffees from around the world. A traditional coffee ceremony is performed in a room with freshly cut grass scattered on the ground, burning incense and coffee beans roasting in a pan. The rising smoke has a heavenly aroma, and the pan is offered to each person to be drawn toward you and inhaled. After being ground with a mortar and pestle, the coffee beans are boiled in a pan with water. The coffee, when ready, is served in tiny cups in three turns together with ‘Buna-kurse’, which is a small snack. This is the other part that makes it a beautiful ceremony.