When in Quito... by Eric Rucker

This article is based on a few semesters living and studying in Ecuador in the mid 1990's. The social context of the visit is living with a typical upper-middle class family of 6 in a close suburb of the capital, Quito. While this may not be representative of how every family in Ecuador eats, it did seem fairly typical of a non-indigenous diet pattern in Quito.

Breakfast
Breakfast often consisted of bread – sometimes sweet bread and coffee (instant – not fresh even though coffee is grown there, it is mainly exported), or hot chocolate (with whole milk) or tea (usually herbal teas like mint, chamomile). 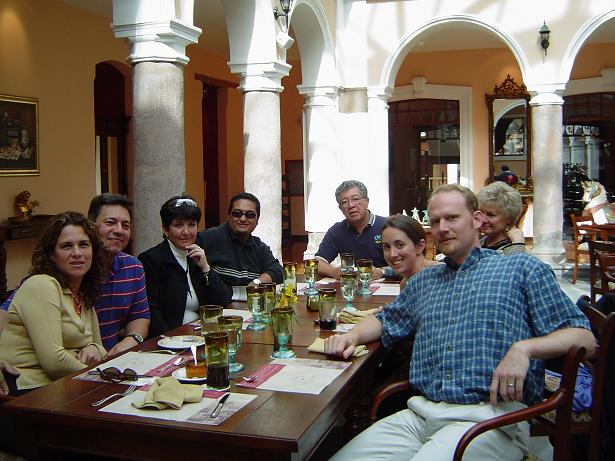 Lunch
Photo at left is of us enjoying lunch out in downtown Quito with family and friends. It is customary to serve lunch starting with a soup and then the main course – this was the main meal of the day and was served around 2pm. White rice was served with lunch and dinner and sometimes even breakfast (fried rice with eggs). No meal was complete without rice. Meat is served with lunch and often with dinner.
Other items commonly included in lunch:
- Soft, salty cheeses which don’t need to age long
- Quinoa - a whole grain found in soups
- Fresh avocado, sliced at the side of your lunch or dinner, common to be served in soups
- Andean Trout
A sweet snack could be chewing on a sugar cane. Spicy food was not common in Quito – the Andes/mountainous part of the country. In the little travel we did, the diet did seem to vary from region to region – the tendency is to eat what is local to the area – in the coast there is more fish and seafood, in the mountains more meat and potatoes, and in the jungle more bananas and fruits and fish!

Dinner
Dinner was usually a small meal, often leftovers from lunch, of just bread and tea and soup. Desserts had a fruit focus, not as sweet as in the US and little chocolate – they didn’t serve cakes, cookies, brownies. Ice cream had mainly fruit flavors.

Popular Ecuadorian Dishes
Llapingachos – pancake made from mashed potatoes and cheese sometime served with eggs, avocado and pork or sausage.
Ceviche - In the coastal area, the signature dish is the Ceviche (lemon-marinated shrimp, shellfish, squid or fish, in cold soup) served with popcorn and chifle (fried chips of green banana).
Choclo – corn served with mayo and salty cheese.
Cuy – guinea pig, more common in the Andes and with indiginous people.

Notes on Food Preparation:
- Salad always had mayonnaise, not many fresh salads, veggies were almost always cooked.
- Many foods were fried, much more so than in the US.
- Only served whole milk as far as I knew – some families had it fresh from the cow on my street.
- Most families bought their produce in local markets, fresh veggies and fruits were usually purchased weekly.
- Bread was bought daily at local bakeries.

- A wide variety of potatoes were popular part of a meal and included in many soups.
- Many fresh fruit juices of fruits not typically found in the US like naranjilla (a small orange color, sour, refreshing citrus fruit), tree tomato, guanabana (a fruit with luscious aromatic sweet white pulp), maracuya (passion fruit) and papaya.
- Many varieties of corn not found here.
- Juicy bananas, plantanos/plantains – sweet and green bananas.

Food and Guests:
- Hard candies (fruit flavors were common) and soda (sometimes fruit flavored), mainly Coca Cola were frequently served to guests during visits, even very short visits
- Fast food was not as common, but was becoming more popular in the mid 1990's. It would be interesting to learn how that is affecting the country’s diet/weight.